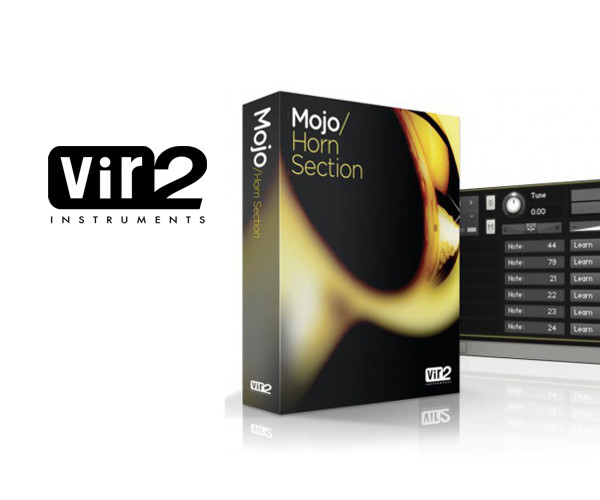 Now at the tips of your fingers is the most versatile horn section in the world, MOJO: Horn Section, which offers the most flexible and innovative approach to pop, funk, jazz, and big band horns ever created in a virtual instrument. Inspired by legendary groups like Tower of Power and the big bands of decades past, MOJO is capable of emulating everything from a sultry sax solo to a screaming full big band playing at the top of their lungs.

Pushing the boundaries of sampling and scripting technology far beyond traditional sample libraries, MOJO offers a simple but feature-packed interface. No need to decide in advance which articulation you want to play. Simply load the instrument, turn the Ensemble knob to specify how many players you want playing that instrument (from a soloist to a dectet) and begin controlling the instrument from the keyboard. More than a dozen articulations are instantly loaded and intelligently handled via performance features and keyswitches. Behind the scenes, a humanizing function, smart release layers, and custom legato and vibrato tools assist the player in reproducing the ultimate dimensions in realism. Crescendos and swells sync instantly to host tempos and can be triggered in real time.

Included in the instrument collection are: soprano, alto, tenor, and baritone saxophones, trumpet (open, muted, and piccolo), flugelhorn, trombone (open and muted), bass trombone, and clarinet. The articulation list varies for each instrument, but generally includes sustains, stabs, staccatos, trills, slurs, shakes, octave runs, rise to hits, falls (including four different lengths), doits, bends, stylistic riffs, special effects, and tempo-synced swells and crescendos. All samples are recorded in 24-bit stereo using the finest preamps in the world, including a vintage Neve 1073 and a LaChapell Audio 992EG, and mics by AKG, Neumann, and Coles.

MOJO is powered by the popular Kontakt engine, offering total integration into all major sequencers via its AudioUnit, VST, and RTAS plug-ins, as well as standalone operation.

At the heart of MOJO are twelve core instruments: Trumpet, Trombone, Trumpet Muted, Trombone Muted, Piccolo Trumpet, Bass Trombone, Soprano Sax, Alto Sax, Tenor Sax, Bari Sax, Clarinet, and Flugelhorn. Using MOJO is as simple as deciding which instrument to load. Solo and ensemble playing is built into each individual core patch, as are all articulations and release types. MOJO makes it as easy and straightforward as possible to begin playing without having to make too many decisions or sifting through dozens of patches. When any of the twelve core instruments are loaded, this interface is displayed.

The first two knobs allow you to control how many players should be playing this instrument (from one to ten) and which mode they should be playing in (polyphonic, monophonic, or legato). These knobs, as well as virtually every other parameter in the MOJO interface, can be controlled via MIDI, so these knobs can be programmed and adjusted on the fly. Using these features, it’s easy to sequence a stacked trumpet section, then switch to a solo trumpet, then return to the section, all within one MIDI track or performance.

As you add players to the ensemble, MOJO intelligently spreads the ensemble around the stereo field and gives you control over their spread, tuning variation, and other aspects of the group.

The onscreen display shows you which articulation and release type is active at any given time. Each instrument includes various articulations and release layers which are triggered via keyswitches, such as bends, runs, crescendos, swells, doits, falls, staccatos, stabs, and more.

Doits, falls of various speeds, and up-slurs are available as releases and are also triggerable via keyswitches. In other words, hold down a sustain chord, then hold down the keyswitch trigger, then exactly when you release the original chord, MOJO will play the release articulation, ascending from the original notes you played.

Each core instrument includes a full suite of integrated effects, such as compression, limiting, reverb, EQ, and more.

Many other engines and controls have been integrated into MOJO, including physically modeled vibrato, advanced humanization, character control (allowing adjustment between mellow vs. aggressive playing), attack control for more percussive playing, and EZRoom one-click convolution reverb.

In addition to the twelve core instruments discussed above, MOJO includes prerecorded riffs and special effects.